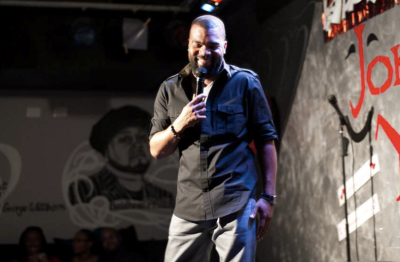 Please Welcome to the Stage…RAY GRADY!

Ray Grady’s riveting comedic style and commanding stage presence have captured the attention of audiences across the country since he made his comedic debut more than 10 years ago. With his unique story-telling abilities, Grady utilizes his platform to find the funny in some of life’s hardships. If laughter is truly the best medicine, Grady’s comedic style is proof. Grady believes, “if you are not somewhere laughing, you are somewhere crying.”

Grady began performing in 2002, and while an undeniable force on stage, he also embodies an on-screen flair that has carried him from his hometown of Chicago, Ill., straight into television and film.

Grady landed his first on-screen role only four years after launching his comedy career. He has held both lead and supporting roles in films including “Subtle Seduction,” “All About the Ring,” and “The Good Life.” Grady was also a performer on BET’s “One Mic Stand” and “Comic View,” and also appeared on TV One’s “Who’s Got Jokes” with Bill Bellamy and Comedy Central’s “Laffapalooza” presented by Jamie Foxx.

He has held lead roles in several theatre productions including “And Then There Was Poetry,” and “Art-Trusion” both at Vittium Theater in Chicago, Ill., and “Living Room Secrets,” at Apollo Theater in New York, N.Y. He was a cast member for the 2014 CBS Diversity Sketch Comedy Showcase at El Portal Theatre North Hollywood, Calif., where he was 1 of 20 people chosen to appear on the showcase out of 5,000 applicants. Grady was also a semi-finalist for NBC’s “Stand-Up for Diversity,” appeared as a panelist for GSN’s “Mind of a Man” hosted by fellow comedian Deray Davis, and was a guest co-host on Urban Hollywood, a radio show that broadcasts exclusively on AcceleratedRadio.net.

Grady has worked alongside other notable comedians such as Tony Rock, Corey Holcomb and Mike Epps. With such a diverse set of projects and a great deal more to come, Grady will continue to blossom as one of comedy’s rapidly rising stars.

Erica Riley
Next Story → Robert Powell and His Love for the Art of Stand-Up Comedy: Why the comedian isn’t in it to go Hollywood, and his take on today’s top comedians’ use of writers