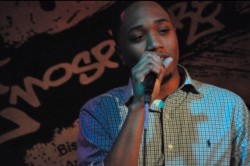 A wise man once said…

Most would agree that in order to be successful at stand-up comedy, it takes months and often many years to master. Stand-up comedy is an art that can be mastered by repetition and practice. The right dose of funny and timing can make or break comedians both old and new. However, being funny may come more naturally to some than others. When one is telling jokes in front of their friends, there is no pressure to be funny. However, when on stage, the audience expects you to be funny, and your jokes are typically structured. It’s a lot different than telling “yo momma jokes” or “knock knock jokes” during school lunch. One usually begins a joke with the intention of guiding his or her audience to the punch line in hopes that they will recognize the punchline and burst in laughter. In a perfect world this would be the case, but stand-up comedy is a little more difficult than that.

Working the comedy stage is like working out in the gym. The more you work out, the stronger you will be. In the same essence, the more once gets on stage and practices their routine, their on-stage presence and confidence will blossom.

See, for me, I had to develop a greater sense of joke placement. I started to figure out which bits worked better in the opening of my set and which bits worked better at the end of my set. I wanted to finish my set strong, so I told my funnier jokes at the end. When I became comfortable with my set, I started throwing new jokes in the mix. Some people don’t like to go away from what works in comedy because, let’s face it, one bad joke can derail a train moving 110 mph. Contrary to what some funny people believe, it is very easy to tell a bad joke on stage. When you do tell a joke that doesn’t go over well, don’t panic. Just pick up your face and crack a joke about that wack joke you just told! Doing so is an easy way to get yourself back comfortable and in rhythm. If you don’t get the audience back into your set, it is not the end of the world. Every great comedian would not hesitate to tell you about their “bad night.” Don’t ever let it get you down. Keep pushing. Keep grinding.

A wise man once said: “He who has never failed, has never tried.”

Jamar Riley
← Previous Story Flag on the Stage!
Next Story → The Dawning of a New Era in Comedy